THE Psychic SAYS: “WITH HELP FROM THE PGA AND USGA, KIDS WILL KEEP GOLF’S PIPELINE FLOWING!” 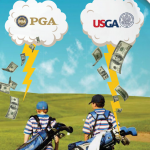 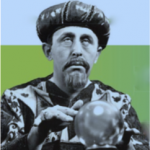 to the question, “What external causes will increase the number of junior golfers and influence them to play more rounds.” The Psychic is seeing mixed messages that include football and hockey and money raining down on golf courses. As the Psychic looks deeper he sees millions of dollars pouring down on golf courses from gigantic, billowing thunderheads. Lightning flashes inside the crystal ball causing the Psychic to flinch away from his tell-all ball. The Psychic notices that these rapidly growing cumulus clouds are labeled PGA and USGA. What can be the meaning of these conflicting signals, from deep inside the crystal sphere?

To ease the pounding headache, caused by uncounted hours of  crystal ball concentration, the Psychic decided to relax and go to a movie. The Psychic’s wife suggested Concussion, staring Will Smith and Alex Baldwin. As the story unfolded, Dr. Bennet Omalu, played by Smith, discovers proof that permanent brain damage is likely to result from head injuries incurred playing football.

The Psychic sat stone still as the movie ended. He was lost in thought… sorting the mixed messages from beyond. The tossed salad of messages, floating in his head were beginning to clear. Searching for answers, the Psychic was up until dawn looking into far corners of his ball following the movie. The Psychic discovered that a growing number of parents are not encouraging their children to participate in contact sports like football and hockey. Some parents absolutely refuse to consent to their participation.

The more the Psychic reviewed the facts, the clearer his picture became. Facts: The average high school football team (grades 9-12) has an average of 100 boys who participate. The average cost per participant is hundreds of dollars per season. The attendance at most high school football games is down. The price tag of coaches, stadiums and custodial work before and after the games costs school districts tens of thousands of dollars annually. Of the 100 boys who play football fewer than 10 will play college ball, from Junior college through Division I. Most high schools have never had a graduate make it to the NFL. There are no senior football leagues, when your high school playing days are over; your football career is over. The Psychic understands that there are many benefits to participation in organized athletics, but football is not a life-long game.

As the Psychic studies high school golf teams he learned that schools have a boys team and a girls team. However, only about 20 to 30 students per school participate in school matches, including JV team matches. The Psychic knows that once a person learns to play golf they can participate their entire life. He also realized that a golfer could take time off from the sport to raise a family or build a business, then years later feel right at home on the course in a short time.

The crystal ball tells the Psychic that many school districts will reduce or entirely eliminate the football and hockey budget and increase the budget for lifetime sports like golf and trap shooting.

The Psychic learned that the PGA and the USGA are not-for-profit corporations. He learned that there are no shareholders expecting dividends. As non-profit organizations, the PGA and USGA’s mission statements are focused on helping maintain and grow golf and benefiting the game.

There is a problem! These organizations have become focused on hosting huge money making tournaments. Revenue from the U.S. Open, the U.S. Senior Open and U.S. Women’s Open generate ever-growing television revenues. The same is true for the revenues flowing into the PGA from the annual PGA Championship and biannual Ryder Cup Matches. These organizations who depend on volunteers to do the bulk of the work have become cash fat.

The Psychic sees a time in the near future when the two national golf organizations, PGA and USGA will invest in the future of golf by purchasing green fees and time on the practice range for youth golfers during slower times on golf courses. This action would allow junior golfers to play more golf and learn to love and appreciate the game. By regularly subsidizing green fees for young golfers, the PGA and USGA will continue to fill the pipeline of lifetime golfers. The second benefit: The additional revenue generated from subsidized youth green fees will allow golf course operators to generate a profit and improve their facilities.

The Psychic knows that the PGA and the USGA executives are looking to the past to solve the participation problems of today. The Psychic understands that his crystal ball is nothing more than another i-device used by todays youth. the Psychic is a fan of Golf Channel and knows that Golf Channel owns GolfNow.com. (GolfNow.com is a golf reservation system that matches excess inventory, unreserved tee times, at golf courses nationwide with golfers who are able to play on short notice.)

The Psychic sees a time in the near future when golf course operators would place some of tomorrows unreserved tee times in a database that could be accessed by junior golfers. The green fees for these young players would be paid for from an account funded by the profits earned by PGA and USGA.

The system would send a digital message to junior golfers enrolled in the program informing them that the following tee times were available. The message would be sent to golfers who reside within a 10-15 mile radius of the golf course. The Psychic knows that jobs for today’s youth are scarce. He knows that in this hurry-up digital world of today most decisions are made at the last minute. The GolfNow concept could easily be adapted to junior golf.

With fewer youth participating in football and junior golfers gaining access to excess tee time inventory paid for from a “grow golf” fund, the golf pipeline should be kept full.

As the storm clouds clear, the Psychic sees a brightening future for golf.

No?? Well then read our Latest Story ⟶