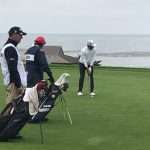 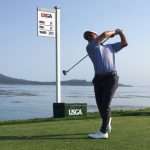 The sun had just cleared the mountaintop as 24 golfers nervously stood on the 17th tee at Pebble Beach. It was 7:30 AM and one – and only one – golfer would advance from this “Sudden Death” playoff to become the 64th, and final player in Match Play portion of the 2018 USGA Amateur Championship.

Because they were members of this unique group of two dozen golfers, Ben Greve and Ben Sigel will forever be connected like conjoined twins. They shared a common experience: The gut wrenching sudden death playoff at Pebble Beach Golf Links in Carmel California where 24 of the best amateur golfers in the world would compete for the lone spot in the field.

These two Minnesota golfers with great pedigrees had traveled to 17 Mile Drive with fantasy hopes of playing in the 2109 Masters. (The two finalists at the U.S. Am receive invitations to Augusta.) Both Bens played well, but Augusta National will have to wait for another year.

The Minnesota Ben’s had come to the U.S. Am from different paths. Ben Greve, once an aspiring PGA professional, is now a part-time golfer and a full-time insurance executive. Ben Sigel, a college sophomore playing golf at the University of Kansas, has his mind set on playing golf on the PGA TOUR. Both golfers, who started a month earlier along with 7,463 golfers, had played their way to the top 88 players in the field. One more shot would get them to the elite Field of 64.

Less than 12 hours earlier the Ben’s were among the, on the cutline, group, waiting the final results. Each player was lost in his private thoughts. They knew that on the treacherous 17th and 18th holes at Pebble Beach anything could happen. In at +4 for the qualifying, both had hope of making match play and a Masters shot. It was almost 8:00 PM when these 24 golfers learned their fate. The cutline moved from +3 to +4. USGA officials quickly huddled, then announced: The play off for one spot will begin at 7:30 AM on hole #17.

After a night with little sleep, Ben Greve hit 4-iron to 8 feet, but his putt for birdie lipped out. The two-putt gave Greve a par, but par was not good enough. Ben Sigel also hit 4-iron that left him a putt from 60 feet. Three putts later, Sigel was also out. The two players who made birdie advanced to the seaside 18th in the sudden death battle.

During interviews with Tee Times, both players felt that they had played well during the 36 holes of medal play qualifying at Spyglass Hill Golf Course and Pebble Beach Golf Links. They loved the golf courses, but both felt that Spyglass Hill was at least two shots harder. Greve made the comment that he could understand how difficult the courses could play if the wind blew.

Ben Sigel, who had rounds of 71 – PB and 76 – SH, finished his first round at Pebble Beach with birdies at 15, 16 and 18 to shoot even par 71 at the famed old course. Day 2, with a 10th hole start, Sigel shot 38 on the back then made double bogey on the 4th at Spyglass Hill to go +5 for the qualifying. Knowing he need at least one birdie, maybe more to qualify, Sigel birdied the 5th and had good looks at birdie on 6 through 9.

Greve started his qualifying round on the back at Pebble Beach. With three bogeys in his first five holes, the birdie 2 on the tough 17th turned his round around. Ben started the front with bogey, double bogey on one and two, and then finished his round with birdies on 4, 6 & 8. (#8 is one of the of the toughest holes in golf.) His rounds of 73 – PB and 74 – SH were very respectable

Ben Greve was asked, “Was this U.S. Am the best experience of your golf lifetime?” He replied: “No! Winning the NCAA Championship along with my Gopher teammates was the highlight of my golf career!”

Sigel who played on the 2017 State High School Championship Golf Team at Minnetonka High School also qualified for the U.S. Am last year. He has yet to make the cut in a USGA event. When asked if he felt nervous before playing the 17th in the sudden death playoff the cool Sigel replied, “I have played a lot of big golf tournaments this summer, so the pressure did not really get to me.”

These two Ben’s, both great Minnesota golfers, will share the memory of their sunrise tee shot on the famed 17th at Pebble Beach. The third qualifier from Minnesota, Parker Reddig shot 8 over in his first big tournament.