King Of The Hickories 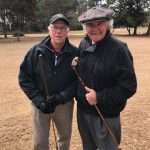 King Of The Hickories

No matter what your passion, there are others who share that sliver of life. This is a story of such a man who has a passion for old hickory shafted golf clubs.

The game began on seaside links land where shepherds knocked round stones into a hole in the sand with their shepherd’s crooks. As the game became more sophisticated, the equipment changed. Feather filled balls called “featheries” brought some consistency to the game. But the real history of the modern game began when hickory shafts were attached to an assortment of metal club heads. The club heads were fashioned to escape the variety of “imperfect lies” found on un-manicured golf links.

William Reed, who lives in Des Moines, Iowa, has a passion for “hickories.” That is the generic name given to the vast assortment of hickory shafted golf clubs that have been developed throughout the history of the game we love.

I met William Reed and John Ausen, his sidekick in all things hickory, at Santa Rosa Beach Golf Club in Santa Rosa Beach, FL. Mr. Reed and Mr. Ausen travel all over the USA playing golf courses with their hickories. “I have been playing hickories for over 30 years,” Mr. Reed explained. “I have played over 2,000 rounds on hundreds of golf courses with these golf clubs.” Mr. Reed was dressed for the roll sporting knickers and an authentic Scottish golf cap.

Reed actually allowed me to hit a few shots with his personal, completely refurbished hickories. The feel is solid and the sound is crisp. The modern ball travels a remarkably long distance.

In a recent conversation I learned more about this remarkable golf character. Reed told me that there are three associations dedicated to hickories and the history of golf using these ancient tools. The three organizations are Hickory Golf Association, Golf Collectors Society and Society of Hickory Golfers. Reed has been instrumental in the development and promotion of all three. He went on to say that there are any number of local and regional splinter organizations around the country and the world. Of course there is the British Hickory Golf Society, and there are also associations devoted to golf history and hickory golf clubs in Australia, France, Germany and other European countries. There is even a group of golf historians and club collectors in China, as well as a hickory association in Nebraska.

Reed who likes to say that he is living in his 75th year on Earth’s golf course plays a lot of golf. When asked his handicap he answered, “As golfers approach my age they are trying desperately to shoot their age. I am just trying to shoot my body temperature!” In his golf travels across the country, Reed is often asked by course operators and members, “How was your round today?”

“My standard answer for that question,” Reed states, “Is just like Ben Hogan’s.” Then Reed explains that in Hogan’s early years he showed up at a tournament on a course that he had never seen. He proceeded to shoot a 65 setting a course record. When asked about his record setting round, Hogan’s answer was the same one I use today. I only hit two good shots.”

Reed went on to explain that the Society for Hickory Golfers is about playing golf with hickories. They even organize tournaments using full sets of hickory-shafted clubs. “Scramble tournaments using hickories have become very popular for big fundraising events. Golfers will pay a premium to play a round with hickories.” When asked where the golfers get the sets of hickories Reed explained, “I can supply golfers with up to 80 sets of hickories. Each set consists of 8 clubs – five irons, a putter and two woods. The freight is a little expensive ,but it seems not to be a problem.”

The question was raised about selling hickories and the values of those historic clubs. “If your readers own or have access to hickories they can call me and talk about their clubs. More than likely I will have a good idea of the value and who the potential buyers might be. If I don’t recognize the clubs they can email or text a picture. This happens all the time.”

Tee Times readers who have access to hickories may contact William “Bill” Reed at 515-490-5159 or email wreedassociates@aol.com. Bill will be happy to visit and share his knowledge of hickories.

Willie Nelson Is A Golfer?

A great story about a wonderful American Character.

Springtime produces all kinds of babies animals. Other animals prey on these babies.

The Owl That Made the Superintendent Famous

Strange bedfellows on the golf course. A fun story about a bird rescue.