Feather Foot, Princeville Makai’s official mascot, is the most famous rooster since FogHorn LegHorn, the old Loonie Toons Cartoon Character we watched on TV when most of us were kids.

Well….. at least he is the most famous rooster on the first tee at the spectacular Princeville Makai Golf Course at the St Regis Resort overlooking Hanalei Bay on Kauai, Hawaii.

In the October Issue of Tee Times there was a story about the Makai Golf Course, https://rjsmiley.com/golf-on-kauai-play-jurassic-park-park-country-club/, also known as the Jurassic Park Country Club.  (Jurassic Park and other Hollywood blockbuster movies, were filmed on Kauai.)  In the October story, reference was made to enjoying a spectacular round of golf while descendants of pre-historic dinosaurs roam freely on the beautifully manicured coastline golf course.

Feather Foot, the proud mascot of Makai, had found a home!  Feather Foot also got his name.  The mascot has an unusual growth of fine feathers that cover his feet.  The crew that work at Makai just started referring to him as “Feather Foot.”

Over the years, Feather Foot has become a ladies man.  Chickens are not stupid.  They are always looking for an easy meal.  The hens, we will call them Feather Foot’s harem, get to eat free meals when they are accompanied by the star himself.

The employees who work in the pro shop and outside services at Makai believe that their mascot has learned to recognize a camera, and people who want an interesting picture.  It seems that whenever there is a camera present Feather Foot shows up.  If he misses an opportunity for a camera shoot, the employees the just clap their hands a few times and their beautiful camera hound comes running.

The friendly and gorgeous Feather Foot has even developed his own personalized “crowing” sound.  When asked to describe the difference in the rooster’s wake-up call, they say: “It is hard to describe, but every time we hear Feather Foot’s cock-a-doodle-do, we just know it is him.  He just sounds different than the other roosters who road the grounds searching for bugs to eat – or a mate.

Each October the University of Hawaii hosts a collegiate golf championship, The Warrior Invitational at the Makai Course.  This year our rooster was present for almost every tee shot for the annual three day event.  He was always near the first tee looking for a photo or of a free food handout.  The collage golfers love him.  What an ambassador little Feather Foot has become.

If you are planning a winter golf trip, strongly consider Kauai, The Garden Island, and St Regis Resort’s Princeville Makai Golf Course.  In addition to the Makai Golf Course, the island contains more wonderful courses than you can play in a week.  Each filled with scenery direct from Jurassic Park.

Information from the Hawaiian Department of Tourism indicates that Kauai is the island that has the highest percentage of return visitors.  There is something magic about the Jurassic Park island and the wild chickens, descendants of dinosaurs, who roam free.  Especially a friendly little blond rooster named Feather Foot. 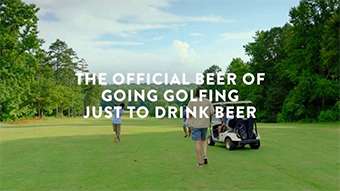 This story is based on a Coors Lite ad. Click the link in the story and then read it.