Hedgehog On The Golf Course

What is this little pet? Answer: Hedgehog. Hedgehogs are still found on golf courses around the world. Science has reduced their need to eliminate pests. 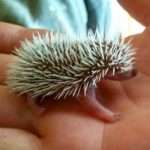 No, I have never seen a hedgehog on a golf course. But, this past winter, I did see a woman on the beach in Florida holding one in her hand while taking a picture of her hedgehog in the sunset. I didn’t even know what it was. I was allowed to touch this beautiful prickly and very gentle creature. In my golfer’s mind, I wondered if these unusual critters ever mixed with humans on the golf course. The more I thought about it, the more intrigued I became.

When I Googled “Hedgehogs on golf course,” I found that hedgehogs were introduced to Scotland about 600 years ago. At first they were called cellar hogs because homeowners would allow one or two of these harmless critters to roam free in their cellar. These, mostly nocturnal hunters ate cockroaches, snails, slugs, worms and even baby mice. Later these animals were then introduced to hedgerows between farm fields where they ate the same type of varmints that reduced farm crop output. These seldom seen night roamers are welcome in gardens on golf courses in the British Isles.

Today these unique creatures are found in almost all countries around the world. In the early 1900’s 12 hedgehogs were introduced to New Zealand. Today about 50 generations later these New Zealand hedgehogs have morphed into a distinct species, similar but genetically modified form their forefathers.

Searching for interesting stories about hedgehogs on the golf course, I found a story of a man roaming a golf course at 3 AM on a rainy night. He was wearing rubber boots and a rain slicker carrying a burlap bag. As he roamed through the trees and searched the rough with a flashlight (In the story it was called a torch – must be a British or Australian story. Turned out to be a South African story.), he was suddenly surrounded by five policemen. They were extremely interested in what he was doing on the course at this time of night. A nocturnal neighbor who lived on the golf course had called the police because the club was scheduled to host a major golf event the next day and there was some real concern about vandalism.

The concerned constables ask the intruder to empty the contents of his burlap bag. As four of their torches brightly illuminated the contents of the bag, the fifth torch shown directly into the face of the intruder. The trespasser explained that he was ear tagging the hedgehog population on the golf course. The policemen then radioed the station house. After a few minutes and some file searching, they discovered that this man had been apprehended several time over the past ten years for doing exactly the same thing.

It turns out that the hedgehog population on and near golf courses is shrinking. As superintendents use evermore-sophisticated poisons and pesticides to kill the very food that hedgehogs love, they are also poisoning the hedgehogs.

In Great Britain hundreds of books, mostly for children, with hedgehogs as the main character have been written over the centuries. Today the citizens of Great Britain are deeply concerned that their beloved little varmint eaters may die-off completely. Several British wildlife associations have taken up the cause and are putting public pressure on golf courses and park boards to stop the indirect slaughter of hedgehogs. http:// www.sttiggywinkles.org.uk. http://britishwildlifehelpline.com.

Back to the woman on the beach in Florida: She informed us that hedgehogs are becoming a very popular exotic pet the USA. These small odorless critters are easy to keep and are even cuddly. More research led me to the seemingly endless number of pet shops and breeders of hedgehogs in Minnesota. Since hedgehogs have morphed into a variety of sizes (all smaller than a small house dog) and several color combinations, a prospective owner can spend hours selecting the hedgehog that is right or them.
A few owner facts: Hedgehogs do not smell, but they should be bathed about once a month. They respond very well to a litter box, just like cats.

The more time an owner spends with their new pet the more affectionate the hedgehog will become. But there is one thing that prospective new owners should know. Whenever hedgehogs are introduced to anything new (including humans) they sniff, smell, scratch and even bite it to learn about it. New owners will expect to be bitten (not too hard) as a form of introduction. To learn more about owning a hedgehog, Google ‘hedgehog near me’.

As I said, I have never seen a hedgehog on a golf course and I may never see one. But you can bet that on golf courses with warner climates, hedgehogs are working to keep the course varmints free.